In 2009 the first global conference on road safety was held in Moscow. This is a little ironic considering Russia has the worst road accident statistics in Europe. Figures from the World Health Organisation show that Russia has 55.3 deaths per 100,000 vehicles per year. For comparison, Australia has 8 and Iceland 5. Even the excitable Italian drivers can only manage 12.

Pedestrians often fall victim to this motorised bedlam. Crossing the road is particularly hazardous (see the 16 Sept entry 'our lives in our hands' at http://diaryinvisible.wordpress.com/ for a tragic eye witness account). Major multi-lane roads in Moscow will generally have pedestrian underpasses (perehods). The only way to cross most roads, though, is by pedestrian crossing.

Moscow drivers will not stop if they see you waiting on the side of the road. You actually have to take the plunge and start the crossing, ensuring you are not so committed that you can’t retreat in a hurry. Most drivers will then stop - reluctantly. The problem is, you can’t be sure they are going to stop – some will deliberately swerve around you; be absorbed in a mobile phone conversation; are drunk; or may simply be incompetent behind the wheel (it is not uncommon for people bribe their way to a licence or obtain forgeries - http://rt.com/news/corrupted-driving-education-accidents/).

Matters are not helped by the chaotic parking, with many drivers blocking the pedestrian crossings with their vehicles. I don’t know if it is illegal to park on pedestrian crossings in Moscow – after all, they park all over the footpath. I get the impression it’s OK to park anywhere that isn’t blocked off by bollards.

I doubt the traffic police would have the time to do anything about this madness even if they had the inclination. People involved in any accident are required to wait with their vehicle and not move anything until the traffic police inspect the scene. I spoke to someone whose husband was rear-ended going to work and he had to wait 4 hours. There have been two accidents at intersections in our street over the past few weeks, and those vehicles were there for hours, blocking the intersection so that cars had to mount the footpath to get around them.

Given the high accident rate in Russia, I’m therefore not surprised that giving out parking tickets (if such things exist) is a low priority. 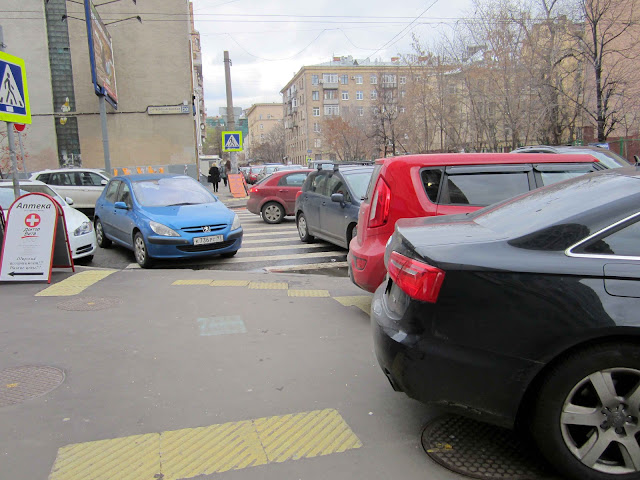 Email ThisBlogThis!Share to TwitterShare to FacebookShare to Pinterest
Labels: Transport