It has been snowing, though rain last night cleared much of it. Last year we didn't have snow until well into December. It seems to have been snowing over much of Europe, so it may just be an autumn cold snap.

There is a cluster of glass towers on the north bank of the Moscow River, about 4 kilometres west of the Kremlin, called the Moscow International Business Centre, or Moscow City.  It was conceived in 1992 and much construction activity has been going on there since, though not without hiccup. The world's tallest tower, to be named Russia Tower, was planned for the site. Construction began in 2007 but the project was scrapped after the global economic crisis.

That hasn't stopped Mercury City Tower, which is still under construction, from becoming Europe's tallest building at 339 metres and Federation Tower will be even higher at 506 metres.

I don't mind glass towers, depending on their context. A city like New York is defined by its towers - take them away and there is no New York.

I am, however, less keen about artificial little clusters of skyscrapers that look as if they were dropped into a city from outer space. Even though they are only 4 kilometres from the Kremlin, these buildings feel kind of isolated and there is nothing worth mentioning at street level - just cold canyons. Stalin's towers were at least congruous with the other ponderously grandiose central Moscow buildings.

A Metro spur line has been constructed to the development, notable for being the only underground line on which one has to wait ten minutes for a train. There are two stations, one of which emerges at the ultra-modern AFIMALL shopping complex. This is a good place for coffee on a cold winter's day - there is a Starbucks right next to the fountain (say what you like - I don't mind Starbucks coffee - and they are one of the few cafes in Moscow that don't permit smoking).


Most fascinating is the collection of giant matryoshka dolls on the top level of the mall, under a glass dome through which the towers can be seen. 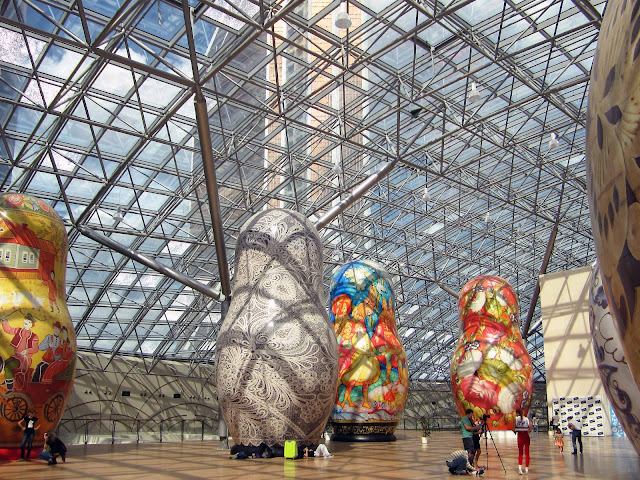