Winter is coming. The temperature has dropped to single digits with the arrival of October. The skies have been grey all week and it rains, on and off, most days.

The Russian word for umbrella is zont, which I think is great. Looking down from our balcony one damp afternoon I noticed that many of the women in the streets carried zonts with fashionable colours and designs. They looked like little mushrooms moving about. Wendy had a boring black zont, so we went zont shopping on the weekend and bought her a very colourful new zont showing Parisian street scenes.

About 3 kilometres northwest of the Kremlin is a large cemetery called Vagankovo, which was established in 1771. It is a short walk from metro station Ulitsa 1905 Goda.

Particular burial grounds have long reflected one’s status in Russian society. This tradition was continued during the Soviet years. The most prestigious burial place is under the Kremlin walls, pride of place going to Lenin, who has a mausoleum in Red Square (after nearly a year here I still haven’t queued up to inspect his remains). Nearby are buried other significant characters such as Stalin and Brezhnev.

If you didn’t quite cut the Kremlin Walls mustard, but were still a big wheel in the Soviet machine, then Novodevichy cemetery was where you might aspire to push up daisies (all complaints about the idiomatic stew in that sentence will be ignored). Interestingly, Khrushchev was buried in Novodevichy and not at the Kremlin. That sort of thing tends to happen when one falls out of favour before one dies in a totalitarian state.

Vagankovo was a bit further down the status ladder - a place for prominent artists, musicians and sportspeople. I won’t bore you with a list of people you’ve never heard of, you can find that sort of stuff elsewhere on the internet.

I’m sure the irony of all this ultimately futile status-seeking in the supposedly egalitarian Soviet Union is not lost on you.

Vagankovo is also the happy hunting ground of many ordinary folk. Unlike the Anglo-Saxon headstone, which blankly offers only a name, some dates, and perhaps a little poem, Russian memorials typically carry engraved pictures of the departed. This is a tad disconcerting, but also quite touching. Considerable expense went into many of these memorials. Often, I expect, by people who could barely afford it.

The cemetery is a pleasant place to stroll on an autumn afternoon. Tree-shaded lanes branch into paths branch into little tracks that weave between the jumble of plots. Most are defined by black, wrought iron fences. Here the grass and weeds have grown wild, there a plot is tended and tidy. Perhaps a little bench and a small rose bush. The occasional person wanders silently by, clutching a trowel and shriveled bunch of flowers. 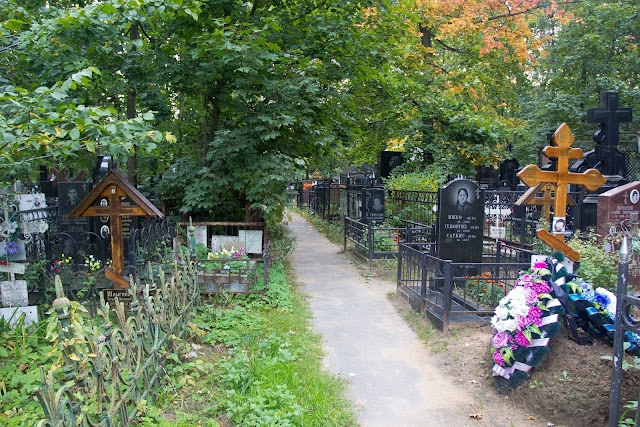 If you want to read more about cemeteries in the Soviet Union, this is an interesting article:
http://www.forumonpublicpolicy.com/summer08papers/archivesummer08/vladimirov.pdf