One of the reasons I love Melbourne is the trams. So I was pleased to find Moscow also has plenty of carriages rattling along its streets.

I have, though, got into the habit of using the Metro (underground rail) in Moscow and only recently hopped on to a tram. It was wonderful to see something other than dark tunnel walls screeching by.

Apart from the Metro (and taxis), there are three main public transport options in Moscow – trams, trolleybuses and buses. The same ticket works on all three (though not on the Metro, which has a separate ticketing system). Tickets can be purchased at kiosks as shown in the photo below. The kiosks are quite common, especially near transport hubs. I usually buy a ticket for 10 trips, which costs 195 roubles (about $6).

And this is how it’s done:

Just go to the ticket office window, say 10 in Russian (pronounced de-yea-sit) and plonk 200 roubles on the little counter. The person in the kiosk won’t be the slightest bit interested in engaging in conversation, nor will they give a rat’s how good or bad your Russian is, as long as you can intelligibly say 10 (or just show them ten fingers). In return you’ll be given a blue ticket and 5 roubles change. 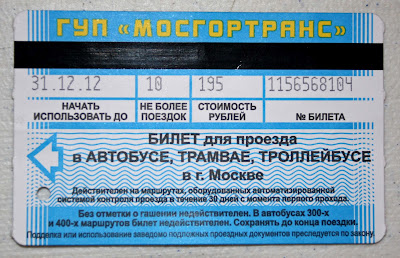 When you get on the tram/bus/trolleybus you’ll be confronted with a turnstile and a yellow ticket machine. Put the ticket into the slot in the yellow machine with the arrow facing forwards and the blank (not the blue) side of the ticket facing up. The machine will validate the ticket and the turnstile light will show green. Grab your validated ticket and enter. That’s all there is to it.

Today we took a long trip across the northern suburbs of Moscow, from near Crocus City to Izmaylovsky Park. My intention had been to use 4 tram routes, plus one short trolleybus journey. Unfortunately, one of the tram routes was not operating and we had to take a bus and trolleybus to bridge the gap.

I’ll outline the journey, as if you are in Moscow on an extended stay and have a spare day, it’s a pleasant outing. I suggest, though, that you pick up a copy of the public transport guide (cover below) beforehand and take a decent map or street directory. People who are not interested in a tram ride across northern Moscow may now prefer to check out something interesting on You Tube.

Take the Metro to Strogino (СТРОГИНО) on the dark blue line (3), to the northwest of the city. This, by the way, is one stop short of the metro station for the major shopping and entertainment complex of Crocus City (metro stop МЯКИНИНО), which I’ll write about another time. A short walk away is the tram line. Catch the number 30. This is an enjoyable ride, which includes a scenic crossing of the Moscow River and terminates at Voykovskaya (ВОЙКОЛСКАЯ), where there is a large, very modern shopping mall called Metropolis (where I usually do my grocery shopping).

From here, take the 27 tram which terminates at Dmitrovskaya (ДМИТРОВСКАЯ). Follow the other alighting passengers, as the route to the metro station isn’t immediately obvious. On the way you will pass through a great covered passage with market stalls. These two trams rides would probably be enough for an enjoyable morning – if so, catch the metro home from here.

However, if you are determined to traverse northern Moscow above ground, as we were, you will need to catch the number 3 trolleybus along ШОССЕ БYТЫРСКАЯ to Mendeleevskaya (МЕНДЕЛЕЕВСКАЯ) metro station. Here you can join the 7 tram to Preobrazhenskaya Ploshchad metro station (ПРЕОБРАЖЕНСКАЯ ПЛОЩАДь – try saying that after a couple of vodkas) and change to the number 11 tram, which will take you to journey’s end at Izmaylovskaya Park.

Unfortunately the number 7 tram was not running today, which messed up our planning a tad. That’s why I recommend taking the public transport guide and a decent map – in case contingency planning is required. Otherwise, there is always a Metro station somewhere nearby.

Email ThisBlogThis!Share to TwitterShare to FacebookShare to Pinterest
Labels: Transport