I have lived most of my life in Sydney. As a result I have developed low expectations of underground stations – the Sydney underground has the aesthetic appeal of a string of public toilets connected by rail.

The Moscow metro has improved my perspective. Underground stations don't have to be dingy.

Novoslobodskaya is north of central Moscow on the circular metro line (brown line, number 5). The brown line and its stations are almost invariably busy as people use them in the same way as drivers use a ring road – to skirt around the city centre.
I caught a glimpse of Novoslobodskaya stained glass a few weeks ago as my train passed through. Having an interest in leadlight, I decided to have a closer look at the first opportunity.

The station architect was the guy also responsible for Mayakovskaya, Alexey Dushkin. The station pylons are faced with pink granite from the Urals. It was opened on 30 January, 1952. 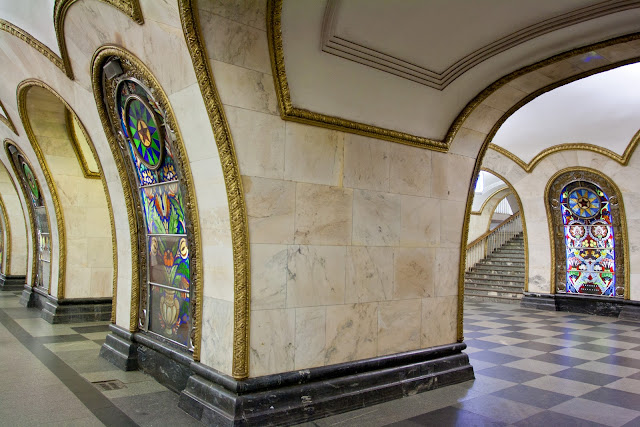 The stunning glass panels, which are illuminated from behind, were manufactured in Latvia to designs prepared by Pavel Konn. 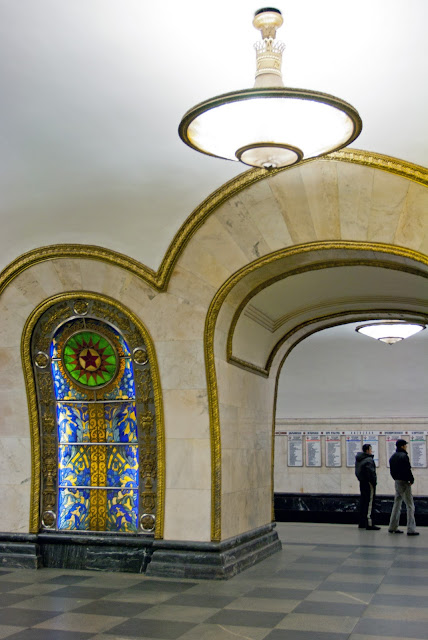 Not content with the leadlight, Pavel Konn also designed a mosaic at the end of the station platform, called ‘Peace Throughout the World’.

Well, in fairness, I suppose the Sydney underground stations do have advertising posters to look at.