We have just returned from a couple of weeks in Greece – the winter in Moscow has been particularly long and we had to do something to get rid of our persistent colds. We also just need to feel the sun and warmth.

Something I have consistently noticed is that many Russian passengers clap when their plane lands. The applause is possibly due to the rise in Russia’s rate of outbound tourism, which has grown from being one of the world’s lowest during the USSR years to ninth. There are currently 40 million tourists a year departing Russia and this number is growing rapidly. Most of them would therefore be inexperienced and nervous air travellers. Hence the clapping. Relief, I suppose.

The paradox of this, to me at any rate, is that flying in large commercial jetliners is quite safe, whereas catching a Moscow taxi to the airport would be very hazardous indeed. Do taxi drivers also get applause for a safe arrival at Sheremetevo airport?

Back in Moscow and the weather has finally warmed up. Sunny days the past week and those piles of snow are finally disappearing. The trees still look like sticks, but the birds sitting in them seem quite chirpy now.

To mark the change of seasons I have photographs from Tsaritsyno Park taken at various times of the year. This park is about 10 kilometres south of Red Square and easily accessed from Tsarisyno metro station on the dark green line number 2.

This is a park I enjoy very much. It has some magnificent buildings set in a charming mix of landscaped grounds and forest.

The park passed through the hands of several noble families before being bought by Catherine the Great in 1775. Catherine ordered a palace complex built, but decided she didn’t like the centrepiece mansion and ordered it pulled down. Another architect designed a new mansion, but, not surprisingly I suppose, with that sort of frivolous approach to money, Catherine ran short of funds. It was unfinished at the time of her death. 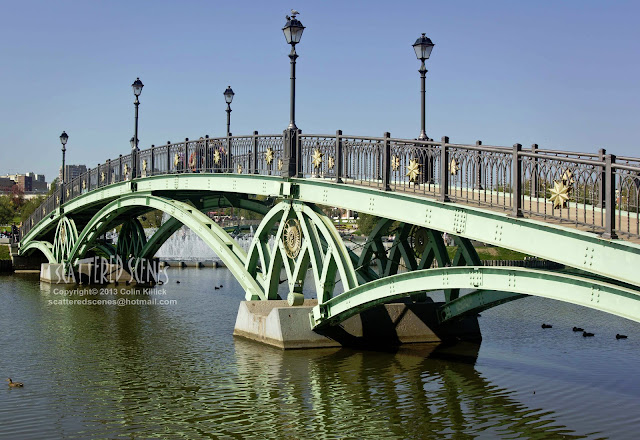