Irked by the fact that New York was building lots of skyscrapers and Moscow didn't have any, Stalin embarked on a tall building construction program. A design competition was held and the result today is seven buildings which are referred to as the Stalin towers, or the Seven Sisters.

The Seven Sisters are scattered across Moscow. I can see the towers of four of them from our balcony, in different directions.

The style of architecture is a sort of ornate Stalinesque, covered-with-statues, Baroquey, pseudo-Gothic - often succinctly referred to as 'wedding cake'. I quite like the buildings, they complement the character of Moscow rather well. New York style skyscrapers would have looked completely out of place, as do the glass towers currently under construction at Moscow City.

The Seven Sisters were solidly engineered. So much concrete and steel was used that they could never have been as tall as New York's buildings.

This didn't stop the Moscow University tower, which I consider the most attractive, from being the tallest building in Europe from when it was completed in 1953 until 1990.

Gulag workers were employed in its construction, some of whom were German prisoners-of-war. For a time they were housed in the building on the 24th and 25th levels.

The Seven Sisters have provided the design inspiration for several more recent tower constructions, such as the Pekin Hotel near Mayakovskaya (close to where I live) and a new apartment tower at Sokol. It can be difficult for the passing tourist to work out what isn't an original Seven Sister. 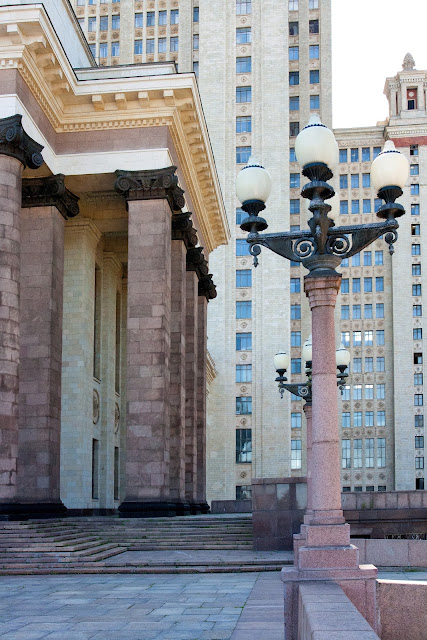 Email ThisBlogThis!Share to TwitterShare to FacebookShare to Pinterest
Labels: Buildings and structures